Replacement Bones, Grown to Order in the Lab 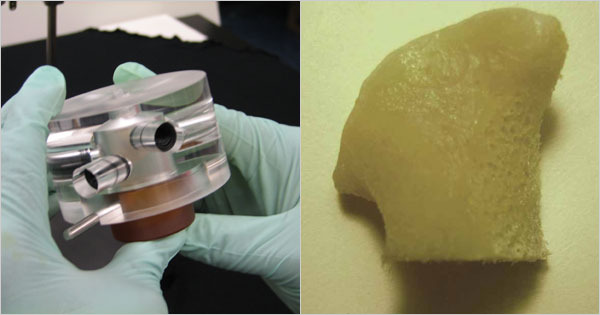 Researchers at Columbia use a bioreactor, left, to house and help cultivate material, right, that evolves into a bone.

IF a lover breaks your heart, tissue engineers can’t fix it. But if sticks and stones break your bones, scientists may be able to grow custom-size replacements.

Gordana Vunjak-Novakovic, a professor of biomedical engineering at Columbia University, has solved one of many problems on the way to successful bone implants: how to grow new bones in the anatomical shape of the original.

Dr. Vunjak-Novakovic and her research team have created and nourished two small bones from scratch in their laboratory. The new bones, part of a joint at the back of the jaw, were created with human stem cells. The shape is based on digital images of undamaged bones.

Tissue-engineered bones have many implications, according to a leading figure in the field, Dr. Charles A. Vacanti, director of the laboratories for tissue engineering and regenerative medicine at the Brigham and Women’s Hospital in Boston. He has no connection to the Columbia work. “If your imaging equipment has sufficient high resolution, you can construct virtually any intricate shape you want — for example, the middle ear bone, creating an exact duplicate,” he said. “It’s a splendid example of tissue engineering at its best.”

Engineered bones are being tested in animals and in a few people, and may be common in operating rooms within a decade, said Rosemarie Hunziker, a program officer at the National Institute of Biomedical Imaging and Bioengineering, which sponsors research in the field, including that at Columbia.

Many businesses, including Osiris Therapeutics and Pervasis Therapeutics are forming around tissue engineering techniques. (Pervasis, for instance, is creating blood vessel linings.)

“It’s a field that is attracting much interest from venture capitalists,” said Robert Langer, a professor at M.I.T. Dr. Langer has more than 750 patents issued or pending in tissue engineering and drug delivery systems, and is an adviser to many companies that have started businesses based on his work.

Scott Hollister, a professor at the University of Michigan, Ann Arbor, is a co-founder of Tissue Regeneration Systems, a company that is commercializing technology his group is developing for skeletal reconstruction in the face, spine and extremities.

Dr. Vunjak-Novakovic, who has filed a patent application through Columbia, said that her lab’s work had attracted considerable interest from investors, but that it was too soon to talk about commercial applications. “We are starting studies with large animals that will establish safety and feasibility before commercialization, “she said.

Dr. Vunjak-Novakovic, Dr. Warren L. Grayson and other members of the team used digital images of the joint to guide a machine that carved a three-dimensional replica, called a scaffold, from cleansed bone material. The team turned the bare scaffold into living tissue by putting it into a chamber molded to its exact shape, and adding human cells, typically isolated from bone marrow or liposuctioned fat. A steady source of oxygen, growth hormones, sugar and other nutrients was piped into the chamber, or bioreactor, so the bone would flourish.

“The cells grow rapidly,” Dr. Vunjak-Novakovic said. “They don’t know whether they are in the body or in a culture. They only sense the signals.”

Traditional bone grafts are typically harvested from other parts of the body, often a traumatic step, or made of materials like titanium that aren’t always compatible with host bones or cause inflammation, said Dr. Francis Y. Lee, a professor of clinical orthopedic surgery at Columbia’s College of Physicians and Surgeons. Dr. Lee also has no connection to Dr. Vunjak-Novakovic’s work.

“If we have an anatomically matching scaffold that can host bone cells,” Dr. Lee said, “this will provide a new way of reconstructing bone and cartilage defects.”

The design of the bioreactor is ingenious, said Dr. Vacanti of Boston, because it allows sources of nourishment and other fluids to permeate the pores of the scaffold as new bone grows within the pores. Often, cells make tissue mainly on the outside of a scaffold, while cells inside tend to die. But Dr. Vunjak-Novakovic’s bioreactor permits close observation and control of additives by the research team. “They can direct the flow and monitor the effect on the development of tissue,” Dr. Vacanti said.

PROFESSOR Hollister at Michigan is also working on creating bones of a jaw joint. But instead of using a bioreactor to grow them, he plans to use the human body as the incubator. The scaffold for the new bone, designed from a CT scan and printed directly using a laser system, is filled with cells from bone marrow or fat that are taken from the patient to prevent immune-system reactions. “Then we will let the patient’s body naturally heal and reconstruct the tissue as the implant is resorbed by the body,” he said.

Many of the components to generate good bones are in place, said David L. Kaplan, professor and chairman of the department of biomedical engineering at Tufts University. “The technology is here,” he said, “to control the size, shape and functional features of human tissue in the lab.”

The complex problems of keeping tissue alive and integrated when implanted in the body are also well on their way to being solved, Dr. Hunziker said. “We are starting to put the pieces of the puzzle together in various combinations to generate good bone,” she said, “and it’s all going to come together in a reasonable amount of time.”