The Mainstream Media’s recent whitewash of late Senator Robert Byrd’s involvement in the KKK as an “Exalted Cyclops” points to a hidden agenda.  Why was Byrd not “burned” politically in the MSM as many others have been for espousing racist views or being connected to racist organizations?  Why does the MSM look the other way for certain public figures, while others are crucified and called racist for relative non-issues (Ron Paul for example)?

Slate.com issued this whitewash of the Klan in general, after Byrd’s death. It actually makes the Klan seem like a bunch of fools just goofing off, and makes no mention of perhaps thousands of lynchings and arsons since the KKK was founded in the late 1800s.  And who knew the Klan was now a community service organization!

Byrd was a democrat.  Since he was also in the Klan, and the Dems are “in” right now, that means, in an Orwellian twist of fate, that the Klan is now good.  President good, democrat good, Klan good.   Actually we’ve always loved the Klan. (Sarcastic reference to the book 1984, for those who like to twist my words)

The refusal of the MSM to criticize Byrd is likely related to his involvement in the Project Monarch MK Ultra mind control program and CIA drug running.  Whether the allegations of victims like Kathy O’Brien and Mark Phillips are true, in a decent society we would at least have an official, real investigation.

But that’s not how this New World Order works.  The drug-dealing Satanic pedos that run the United States are not about to allow their little corporate media toadies anywhere near Project Monarch.

Some exerpts from the Slate article that inspired this rant (emphasis and italics are mine):

Despite the specific duties laid out in the Klan’s founding documents, there’s no way of knowing exactly what Byrd did as Exalted Cyclops.

Except maybe a little investigative reporting, such as contacting some of the former members of his possee of KKK minions, or their children, if they’re around.

There wasn’t much money in it for Byrd,

Awww, I guess we’ll just ignore all that lynching and cross burning.

Today’s Exalted Cyclops is responsible for rehabbing the chapter’s image, as the Klan tries to rebrand itself as a community service organization…

The Klan’s whimsical titles …  while odd to the modern ear, were in line with fraternal organizations of the time. Members of the Masons, the forefathers of the fraternal-order movement, aspire to be Worshipful Masters or Senior Wardens.

The Lamb’s Club, which first appeared in the U.S. in 1874, is headed by a Shepherd and a Boy. When the Shriners formed in 1870, their leaders were styled the Potentate and the Chief Rabban.

Are we really comparing the KKK to a “Lambs Club?” 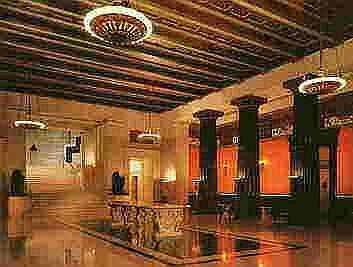 “… The KKK and Freemasonry relationship thereby is as a seamless as could be. From it’s inception through the open recruiting of masons in newspapers to the KKK, to the use of masonic temples and halls for KKK meetings, to the rituals, rites, and occult themes, to the high degree masonic membership of the leadership of the old and new klans.” [source]

Albert Pike, 33rd degree freemason and one of the original founders of the KKK, is buried in the “Atrium of the Supreme Council 33°,”  In DC (left).

A bust of Pike can be seen in the distance on the landing in this photo of the Grand Staircase which leads up to the main temple room which all 33° Masons must file past. Pike is buried in a secret crypt under the stairway, beneath the bust, the only Freemason to be given this “honor” [source].

Since Illuminati control the corporate whore media, examining which politicians are given free passes and which ones are burned as scapegoats gives us clues about their involvement in shadow government activities.